I cant believe today is the day we have both been working so hard for has finally come and all of a sudden it feels too soon. We've been so busy I've only just been hit with pre SVA nerves. I wont lie we want it to pass but if it fails it fails and we will make the necessary changes. I know Dad's worried about just getting there but i really think what we have built is a quality working car if not a little rough around the edges but thats just the aesthetics.

We both managed to get the day off so one of us can drive the MNR and one can drive a support car incase anything goes wrong and to carry all the bits and bobs we might need - basically the whole garage just incase a stupid fail can be rectified there and then.

Half the kit in the boot. The rest scattered over the back seats and front passenger footwell. 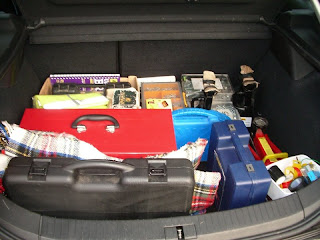 Mitcham is about 8 miles away from where we live going through roads that have some heavy traffic during rush hour. Were up at sun rise to get final bits prepared and be prepared to leave at 7am to hopefully miss the bulk of traffic seeing as the cars not been thoroughly test.

At 7am we were ready to leave with the Leons engine running and the MNR on the road. Dad strapped himself in and started the beast in the near zero temperatures. Started easily like it has since all cylinders have been working correctly. Dad went to lead, moved a few feet and stopped. I can hear his voice and "Oh shit!" comes into my thoughts. The clutch has gone as dad finds the pedal floppy unlike its normal feel. All systems go we got it back on the drive and in the air. Hoping it was the easier of the two faults we loosened the bolts that retain the clutch cover, release the clutch arm and rotate the lever till we have some feel. Bolt it together and check the clutch. It has feel half way down then doesnt move which means the clutch spring plate has inverted meaning full clutch cover, cable retaining ring and spring plate removal. Fiddly work with everything in the way but we complete both attempts in under an hour. To avoid the problem again we set our clutch pedal stop to the maximum. Not ideal but we couldnt risk it happening again.

Second attempt at getting on the move and were off but in busy morning traffic both fddling our thumbs and counting the minutes to hope we make it. Dad's clearly nervous as the indicators are staying on for a mile after the turn and im just praying every stop in traffic that the clutch quick fix holds out. We manage to get to a petrol station and fill it up with BP's finest but the restictor almost completly stops fuel getting in and only the lightest grip on the pump trigger gets fuel in. At the same time fuels dripping from the tank where the filler hose hasnt been tightened enough from the day before. For the time being we left it and kept on to the VOSA test centre. With 15 minutes to spare we make it and no longer care pass or fail as atleast we had made it as if we hadnt it would almost be a dead cert it would be rescheduled under IVA which for this car would be nigh on impossible or involve terrific expense. 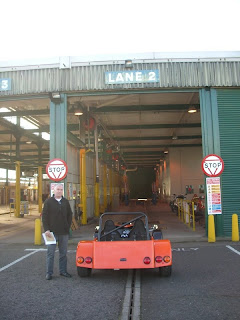 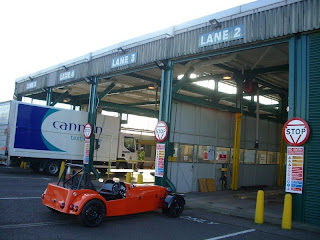 After all the bad things i have heard about testers the chap that will decide the fate of the Vortx is very nice, laid back and chatty through out giving us the chance to make as many simple mods as possible. Unfortunately the very first test on emissions shows a fail at fast(2500-3000rpm) and standard idle and even 3 attempts later its no better. Being nothing we could change we started to feel a bit more relaxed taking in all the testers useful info ready for a retest. 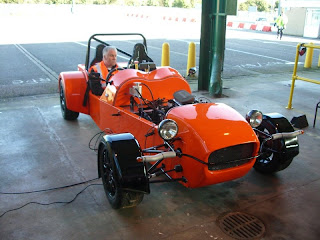 Next up was the radius and safety tests. Our hugely wobbly bumper bar was an instant fail. A few odd nuts and bolts required covers which we luckily had. The tough foam surrounds for the clocks and seat mounts unfortunately failed due to unsuitable materials as thick rubber would be more weather resistant and absorbing in a crash. The OMP wheel with quick release boss failed as it needs to be collapsable - never knew about that! Pipe lagging on the dash bars wasnt needed as the alumium edge of the scuttle is filed down. The seats belts are fine to raise up to the seat but need to have thicker plates acting as support to spread the load on the floor - 100mm x 100mm x 4mm thick or the belts can be put around the seat for the easier fix.

The fog light failed on not being completely vertical which we tried to ammend with hose but it needs to be rotated at a massive degree to pass which we also left for the retest. The rest of the engine bay, lights, interior, underside, boot and suspension etc all passed fine. The fuel neck restictor was tested and passed - good thing we ordered one on friday. 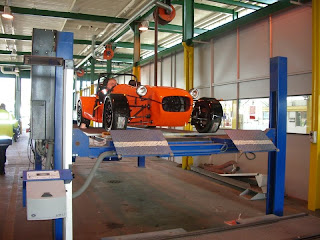 Next is the speed test where the driver is asked to take the car up to 20, 20, 40, 50, 60, 70 mph to test indicated and actual speed. The calculation for the speedo healer worked great to accomodate the wheels and 3.38 diff. Up on the ramps we were asked to remove a wheel nut from the front and rear wheel - fine no problem although ive never heard of this being tested

Onto the brake test we had left the bias bar not locked, ready to adjust at the correct level. It went on the rollers and looked like only the front wheels locked and nothing else performed great. I was thinking this could be really bad so ask the tester hows its going and it needs to be weighted at the weigh in bridge to work out braking force needed. We made it round to the weigh in bridge which is an easy on off test then parked round the side for the tester to make his calculations on braking force needed - Sounded grim. 15 mins later and he strolled over say its fine. we could have locked the bias bar on the spot but thought theres no point and asked him how he wanted it done for the retest - he will only accept drilled clevis yokes with roll pins or welded nuts no split pins or nylocs like we had planned.

Mirrors were next and the tall 6ft plus chap climbed in to check the rear vision which was fine with CBS "sva ok" mirrors. Final item was the self centering. On test drives ive been banging on at Dad to test this works and he always comes back not sure having never let the wheel out of his hands. Prior to the test we pumped the wheels to 40psi and left the stock MNR geometry settings. The tester asked us to put the wheel at full lock and drive with hands off the wheel. It quickly self centred after only a few feet - Job Done! 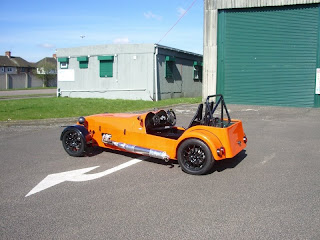 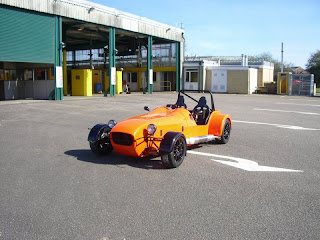 We receive our SVA fail after 20mins of waiting and get back happy we made it with a couple of items to recifty.
Newer Post Older Post Home