Today we are going to get started with the pedal controlled cables.

We had already attached the engine end so for the pedals we drilled a hole into the bulk and pushed the cable through, attaching it with the two nuts. We removed the accelerator pedal, drilled a hole it to house a M5 bolt. With a threaded sleve to accomodate an M5 bolt we drilled a central hole in it. This is so the cable can be threaded through then the M5 bolt can thread in and hold the cable in place. It just needs to be adjusted however as currently the pedal sits on the floor.

We need to start with the clutch cable from scrath. After a hand from Kriss with his recently finished MK Indy we know where to locate it. Its routed from the bulkhead in a sweeping arc to pull on the clutch lever from the left(if sitting in the car). The R1 comes with a mounting bracket but its much smaller than we need. We re-bent the bracket to accept ours but we would like to fabricate something soon to not allow the cable to detach from the bracket as on the road this could be a problem with vibrations. 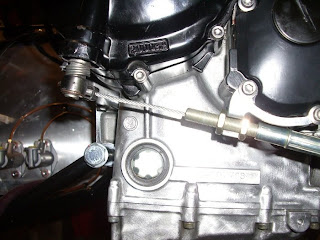 The end to the pedals needed a hole to be drilled to attach the cable. we then drilled a hole in the pedal and attached the cable with a m5 threaded rod end bolted to the pedal with an m5 bolt and nyloc. Pictures of both cables in the bulkhead panel and pedals 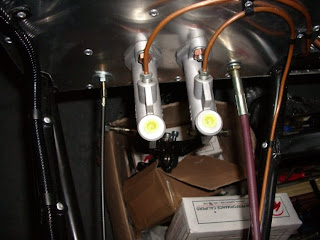 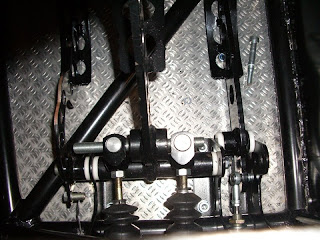 As we stated in an earlier post the EXUP motor is being replaced with a circuit to fool the ECU, so no fault codes and dash lights are pop up. Following some help from locostbuilders yet again we bought the necessary components from Maplins for about £5. We soldered the components to a copper circuit board - very fiddly work, and then joined it to 4 wires on the loom that operate the EXUP motor. Heres the finished article, its tiny so the picture is rubbish but hopefully should do the job. 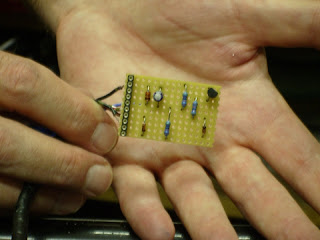 We have a small creamy white ABS plastic box to house the circuit that looks like this. 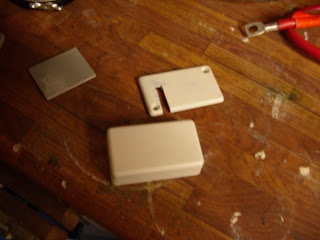 Its not going to fit in so i've decided to tart it up by rubbing it down then giving it some light coats of satin black paint. Once the circuit was in the box we padded it out with some small strips of foam and sealed the box and wires so no water gets in. We mounted the circuit with some aluminium and fitted it just by the wiring loom using the smallest rivets we had. Its held in place by some velcro as we couldnt think of anything neat enough to secure it plus it weighs nothing. Here it is all finished up. In the picture you can see we also p-clipped and riveted the wiring loom finally to the chassis. 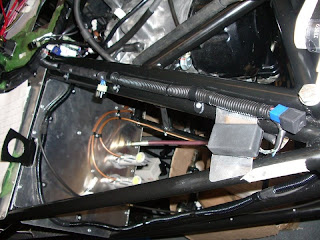 The gearbox earth strap has been earthed just below the circuits mounting bracket to keep it looking as tidy as possible.

In past posts you will have seen the wiring on the scuttle is a mess. To tidy it up we made a aluminium bracket to house the relays, sensors, fuses and the R1 ECU. Its going to house quite a lot so we secured it neatly with some rivets to the top chassis rail and the scuttle panel. 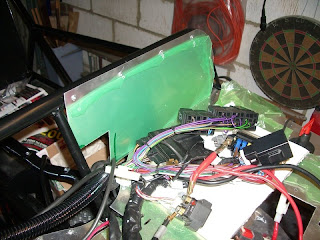 .
My dad set about making holes, sub brackets etc for all the pieces as some, like the pressure sensor arent flat and the R1 relay needs to be mounted to a tab as it has no mounting holes. Here they all are mounted in place. I think it looks great! 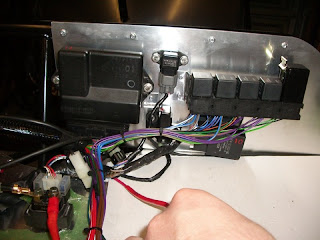 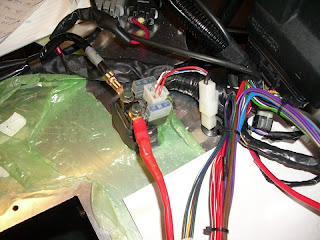 In the picture you can also see the black negative wire going through the scuttle and that is earther to the chassis bracket beneath it. We taped the chassis to accept an M6 bolt and sanded the chassis to make a good earth. The other end of the negative wire is being connected with the car negative loom before it attaches to the battery. More on the battery next time as we have almost got it all sorted.
Newer Post Older Post Home