Having run the engine one evening we have a suspicion somethings not right. The engine doest idle great and is difficult to start which having not owned a bike I assumed might just be normal. But today having the car outside i can see the headers are different colours, 1 is silver like they left the factory and the other 3 have a distinctive golden tint which i think is down to running on 3 cylinders even though its sounds and runs quite well. To diagnose the problem i can the car in diagnostics mode 32 to check the plug but as i thought it was fine and there is no smell of fuel in the chamber which leads to the injector testing i run all 4 and there is no click from 37(cylinder second from the front). Injector problem it is then! Being annoyed with another running problem i whipped the throttle body off and dismantled it down to the fuel rail in double time. I removed the offending inector and abused it with throttle body cleaner before leaving it in a injector cleaner bath. Being impatient i only left it 2-3 hours then refitted it all. Running diagnostics again all injectors click and with the engine running it starts easier, runs smoother and has a lower idle. 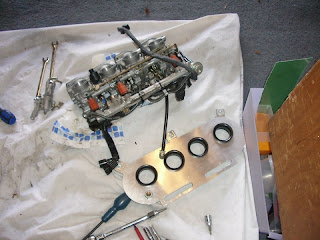 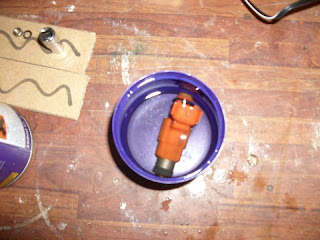 As the seats and belts have been test fitted the interior can be put in. Were using sika flex to hold it in place with the tunnel being held in by 6 bolts attaching to rivnuts. A handbrake gaitor has been made by my mum as she was feeling left out not working on the car - unlikely as she rather prefers the warm indoors! it took a while but the finished item is very nice and we hope the inspector will accept velcro to attach it. 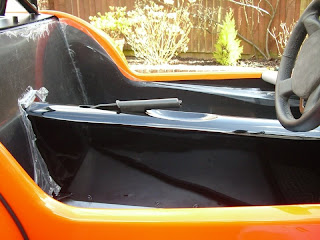 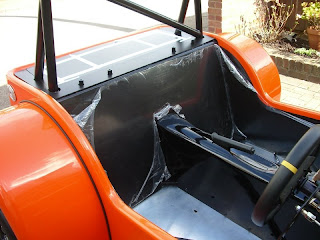 To get through SVA there cant be any sharp objects incase some one cuts there little finger or something stupid like that. Because of this were making a cover for the centrally mounted clocks and steering wheel. Were using dense foam that we shaped with a dremel and attached with cable ties. 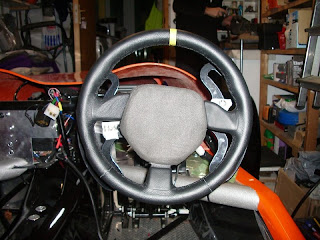 Dads been making one out of mdf thats become unsuitable for the job after finding out during the SVA the inspector may ask for it to be removed which would not be possible with the one he's made. We had planned to make something nice and neat after sva but with not much to do it made it worth doing now. It took a morning although much less time than was wasted on the first attempt and it looks really neat if not super fiddly to fit getting around all the roll bars. The hole in the middle allows us to fit a door that we can lock and also use to bolt and unbolt the cover if needed for inspection. With some hinges from b and q and 2 locks from screwfix it can be put together and offer some security.

Thats it! theres really not much else we can do as the final assembly is out of our hands with our savage indicator switches still with MNR to be replaced for a 3rd time after 2 sets were sent out wrong both being momentary rather than latching so the indicators dont stay on. We also need the MNR loan SVA kit which was ok 3 weeks ago but now isnt - leaving us both annoyed as we've come so far recently and had the hope a first time pass was possible but what can you do.
Newer Post Older Post Home