Brake Bleed
Last week we started on bleeding the brakes - a nice simple process of getting air out the system by opening the nipple on a caliper whilst the pedals pressed. Or so it should be. Whilst pumping the brakes i realised the bias bar (bar offering leverage to the seperate brake lines) was locking as it had too much room to move around the pedal meaning at a certain point the pedal would go no further and the brakes wouldnt not work - plain dangerous really! Only option was to start again - unscrew brake hoses, undo mounting bolts for cylinder, unscrew cylinder from bias bar and then unscrew bias bar clevis from bias bar to remove. Using some large washers we refitted the bias bar and tightend the two clevis's closer to the pedal to remove the chance the bar could lock. Then we refitted the rest and could bleed the system knowing the pedal could move fully without locking. 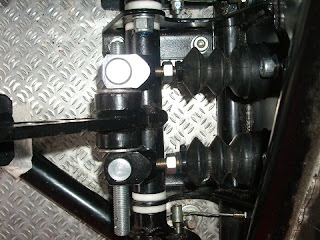 A new problem arose when we went to bleed the wilwood calipers as being american use a 1/4 inch bleed nipple. Luckily one of the chaps up the road, keen on his cars had a couple to spare. We managed to get good pressure on the pedal but had sprung a drip at the front t piece so we tried some ptfe tape to make a tighter seal.
Brakes all done we rolled the car down the drive and it happily stopped once the pedals pressed and even the handrake worked as it requires some hydraulic pressure

Thermostat Outlet
After fitting the bonnet the other week we realised a pipe going to the thermostat was not going to fit as it faces straight at the bonnet with no chance to turn and get out the way. There were a few solutions but basically involved a lot more reworking(cutting, welding, new hoses, more money and importantly more time). Jim helped out again as he thought a R1 top thermostat housing off a 5jj model would fit and he had one lying around. We snapped that up and it fitted perfectly although it does change the top hose location and the nose needs a little trim to accomodate this but is a far better compromise. 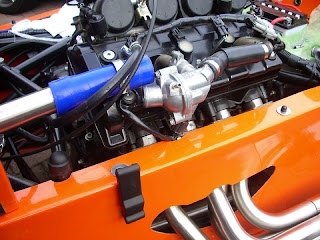 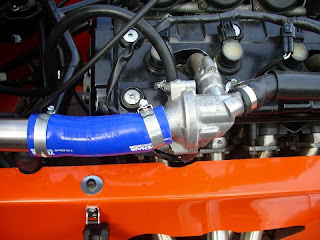 Interior Trim
Were actually running out of jobs to do at the moment so we thought we would chuck the already trimmed side and back panels in now the brakes and handrake were ok and hopefully would require any more attention. For SVA and for a quick fit were using velcro and tiger seal as post sva we need to make adjustments before fixing for good.

Seats
I cant remember if this has been mentioned before but we fitted the seats with the supplied spacers and trimmed where they would touch the tunnel and side panel. Attaced U trim to them and before they were fitted finally we made the holes for the seat belts and fitted them along with the seats. It is a bit tricky fitting the seat bolts when its on the floor so we opened the holes and used 2inch wide washers to spread the load. 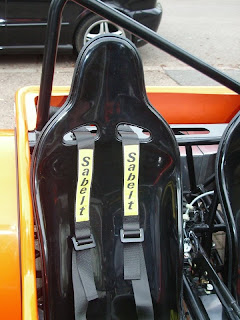 SVA Covers
To get through SVA there cant be any sharp objects incase some one cuts there finger or something stupid like that. Because of this were making a cover for the centrally mounted clocks and steering wheel. Were using dense foam that we shaped with a dremel and attached with cable ties to the steering wheel and double sided tape to the dash.
Newer Post Older Post Home