Back on with the final assembly were left with the nose cone. This never fitted well when we left it a few months back and well its the same now. We started with some trimming to clear the recently added water hoses and then shaped the lower chassis rail to get it within the nose cone. We trimmed the nose cone to accept the headlight bar and wiring. Like everything it went on and off 10-20 times untill it was as close as we could get it. It butts up to the side of the bonnet but for some reason there is a wider gap at the top of the nose cone. To secure it in place were using the 4 existing bolt holes at the top of the chassis and nothing else as its very tight.

Before fitting it all back together we refitted the headlight bar and headlights. 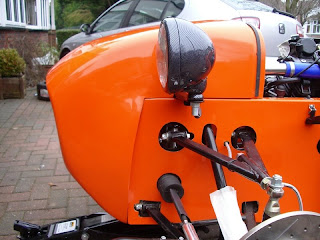 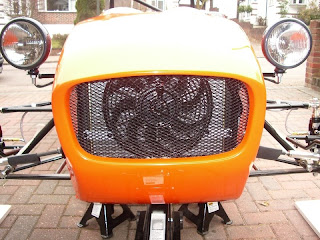 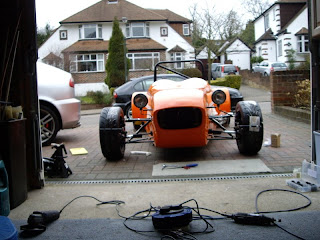 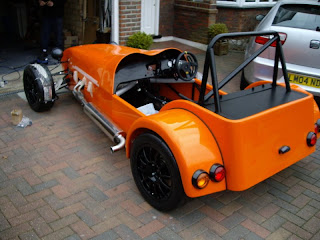 Next up the bonnet and the catches. The catches are a two piece item a metal piece that rivets to the bonnet and the latch assembly and handle on the tub. We thought at first about using bolts and nuts but its far to fiddly for this. Rivets need to be used although the sound when they pop is worrying as if the whole tub has shattered. We are happy with the fit but with a bit more time we would push the scuttle forward and the nose cone back just to take up the 2mm gap. 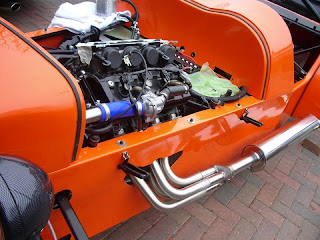 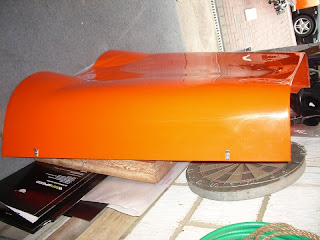 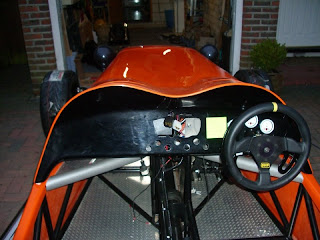 Its really taking shape and its amazing that 1 days work can really make it look instantly more recognisable as a car.

Along with this ive wired the temp sensor, wired the switches to light up when on(hazard and fog) as required for sva as we dont want to drill 2 more holes and buy 2 more warning lights, wired and made a hole for the low brake fluid warning light, wired in the meter lights, fitted grip tape to the pedals. Dad tested the seats and they go in but the sides of the seat need some work to allow the tunnel and side panels to fit.
Newer Post Older Post Home