Were now starting to use the car for longer journeys where some boot space would be really handy. We got an MNR boot box thrown in with the deal when the kit was picked up in December 2007 but whilst fitting the body work we test fitted it and realised it was never going to fit. Firstly it’s too deep, it doesn’t clear the fuel filler hose and the sender wiring, its also not long enough to attach it to the chassis by the seat belt brackets. We could have binned it but then we wouldn’t know where to start so instead we are attempting to chop the one we have and use fibre glass to remould it to the correct shape. 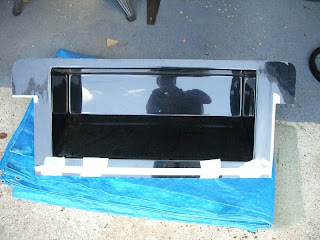 We started cutting out sections that were causing it not to fit. Once we were finished it barely resembled a boot box. We then used the off cuts to fill all the holes made and taped into postion ready to fibre glass over. Its horrible stuff so I wore gloves to do the messy work and dad was armed with a paint brush and lollipop stick to mould it into position. Resin is mixed with a hardener to make a quick setting glue. This mixture is applied to sheets of glass fibre matting until soaked and then it can be wrapped around the subject. It didn’t go 100% as planned with a few air bubbles but after it set it was incredibly sturdy. 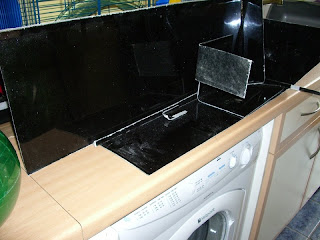 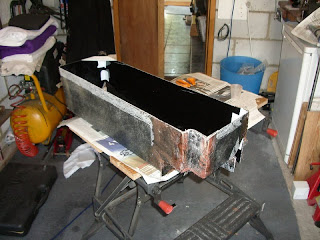 It was a really long job so were leaving it till another day to finish off.

Next up is the weak flexing MNR paddles which can make it hard to get into gear. The current one is 3 pieces bolted together to be adjustable. As we knew our steering wheel size we decided we wanted a once piece. We used the existing one as a template and traced around it onto paper then hardboard. When we were happy with a design we dropped it off with Dad’s cousin to be made in thick steel. 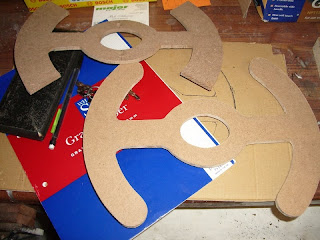