After the days spent fiddling around with the tub we finally managed to get the whole thing bolted down. We started with some tiger seal on areas the chassis would rub against the tub. Then we fixed the tub down with bolts after working out the correct order to do them up in as it turned out extremly difficult if we tightened the top front down first rather than than from the back first. 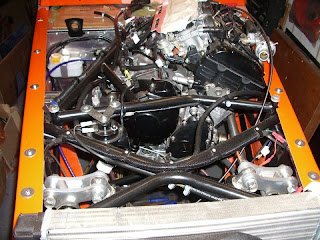 Finally a new job after the fun we didnt have with the body. We started with making the holes as suggested in the manual. This didnt work to well as there was insufficient clearance for the coilover from what we could see. A bit of dremmeling and it had room to breath. 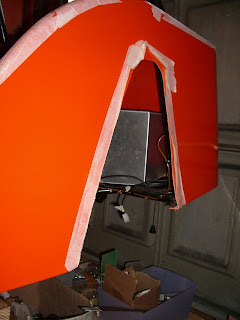 With the wishbone bushes all pressed and fitted from earlier we located them into there mounting brackets. After a few scuffed knuckles we had them in place so we fitted the bolts and found them too long so cut them to size. With both wishbones in place and the upright attached to the lower wishbone we both wishbones arent symetrical. The bottom one can only go one way round to fit the driveshaft central but the top needs to be fitted so there is enough room to fit the coilover at straight. Ours is fitted towards the front of the the upright so the coilver can be fitted behind as we found this was the best fit. Then its just a case of fitting a million washers and a rose joint spacer either side of the rose joint. Heres a picture with the wishbones and coilover to attached to the upright with a copper pipe, dont worry its not permanent. 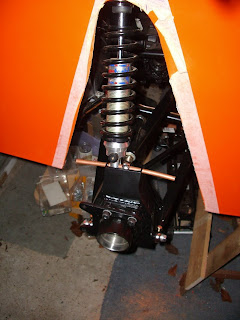 With the suspension in place we can fit the driveshaft, caliper carrier, caliper, bearings, brake disc, hub and finally the wheels - hooray! To get the shaft in we removed the upright and pushed it into the diff splines untill it was fully seated. The grease caps are the slid on with the tapered bearing. We fitted the upright with the caliper carrier and hub carrier together with 4xM8 12.9 socket cap bolts with serated washers as theres no room to use nylocs. 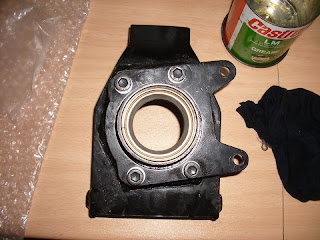 The assembled upright is then pushed on over the drive shaft and re-attached to the wishbones. The next tapered bearing and the grease cap can then be slid on followed by the hub, washer and hub nut. 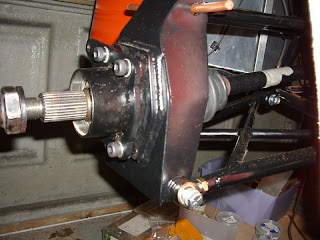