With the back end almost complete and only needing a 41mm socket to tighten the hub buts up we moved on to the front end. The body is tight now and we have had to trim some more off our original holes to get everything to fit in again so it has enough up and down clearance for when its on the road. It was a right pain to get everything back in but eventually it all came together. 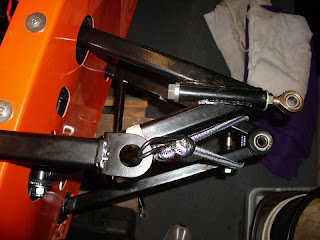 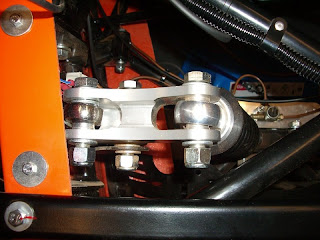 Everything connected up again minus disc, caliper and hub so we can get around the garage as its all getting a bit tight. 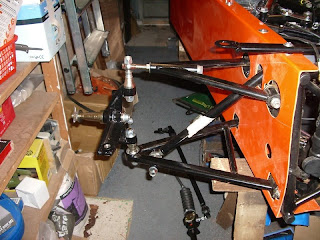 We started this job by making the holes bigger for the steering arms as they are tiny. We dont know exactly where the rack will sit but other than undoing the tub we aren't going to get it into position. We've seen from pictures of finished cars that there racks lay almost horizontal so we mocked up a pipe to show us where the rack would lay then chain drilled out existing holes larger. Removing the rad and fan enabled us to feed the rack through the passengers side and then back through to the drivers when at full lock to the passenger wheel. 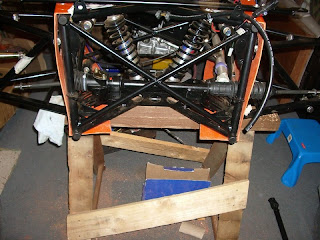 We then fitted the retaining brackets with some extra spacers to hold the rack tight and secured with M8 12.9 hex cap bolts. 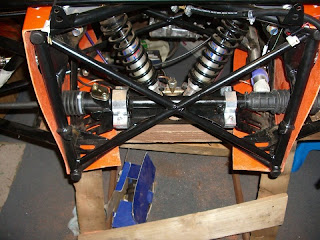 The lower coloum can be fitted and we then checked that it worked and turned the rack from lock to lock with ease. Although we had resprayed it there is some that needs a lick of paint to keep it looking new like the rest. 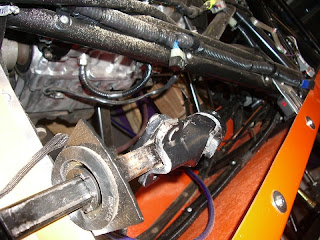 To hold the lower coloumn in place we need to mount the steering column bushing. The bulk head panel really got in the way and has deformed the bush but the plastic bearing piece just about squeezed in with some grease. Then we could attach the upper column to the lower and it was now time to trim the scuttle to make it fit. Like the tub earlier in the build the scuttle came on and off many times and we made loads of measurements to get it right first time as it would affect the interior finish if done in the wrong position.
Heres how it finished up 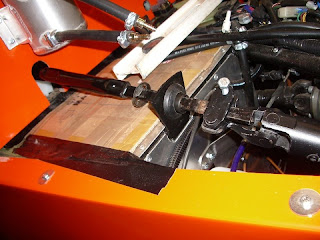 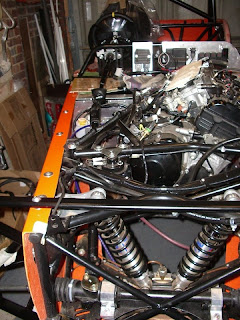 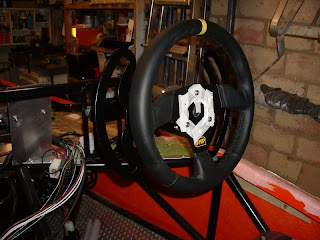 The R1 apparently requires the airbox mounted air sensor. Were not sure why our engine didnt come with one but Malc from Yorkshire Engines sorted usa Suzuki unit out. Being a Yamaha and not a Suzuki id doesnt fit our original connection but is close. We thought about attaching it with bullet connectors but the Suzuki end is a bit mangled so I butchered it with a dremmel to fit the Yamaha end.

The green section was twice as long as it is now 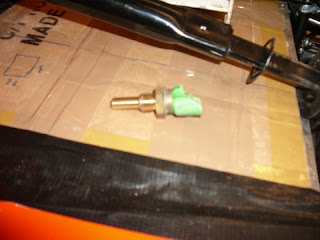 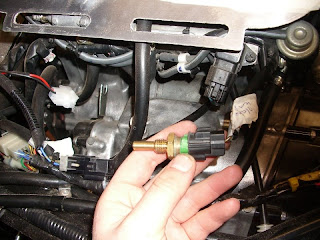 My dads mini bain of a project - the headers and collectors. He has spent hours of hard work on them which really deserves a pat on the back. If i havent mentioned it before none of the pipes went in more than a cm so he started sanding them one by one. One of the pipes went in half way and got stuck even after the sanding. It wouldnt budge for anything but a mate helped us out with an oxy accetaline welder massively heating it up then forcing it out from the collector end. It has left it a bit mangled but we can rotate this to the bottom. After lots more sanding were at today where he has had all his doubts put to rest when we finally bolted them into position with the gaskets Malc sent us. The headers were bolted to the collector first so we could pass it through as one unit into the engine bay. Its a very tight and a cramped area now so we bolted them in moving from chamber 4-1-2-3 as 4 at the very back is the most difficult to reach as the nut grinds on the header itself unless in at the right angle and even then my dad had cut a few threads of the stud off. We werent quite sure how tight to do this so with a 13mm spanner we did it as tight as possible leaving all 8 studs with the same amount of threads showing bar the one he had cut. 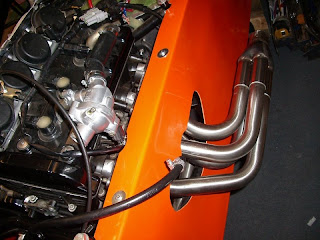 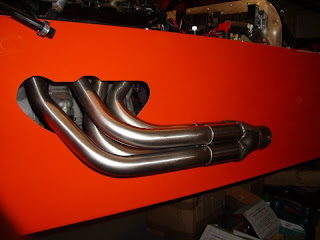