Build Day 25 - Its even colder but theres light at the end of the tunnel!

Last week was cold but its nothing on the weather this week with 12 inches of snow! We have both been really busy with work, I've had interviews and of course the days of for the obligatory snow days! 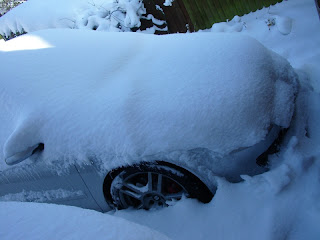 Not much has been done. Now its saturday and we still cant open the garage door because of the snow so were going to try and work indoors. The main projects for today are more wiring and holes for gauges, R1 clock and switches in the scuttle.

First off though we needed to finish the exhaust silencer. The tip has a much smaller diameter hole than that of the silencer. Dad used some thin aluminium to create a spacer and then tightened it up with the Mikalor exhaust band clamp. That finalised, we started the engine and wow the difference is night and day. It really has turned the roar into a mellow throb which were hoping will be enough for the stringent SVA noise regulations but we might want something fruitier to compete with the pink V8 cobra replica a few houses down once its registerd. 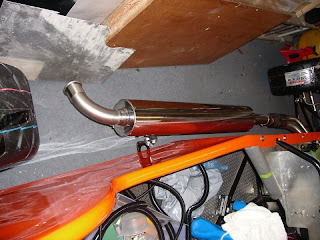 I dont know how many times i have written about wiring but its too much so imagine actually carrying out the work. I had quite a few wires to extend then - illumination, earths, ignition and sensor wires. I have connected all the earths and lives into two parallel circuits based on a layout I remember from primary school electronic work. 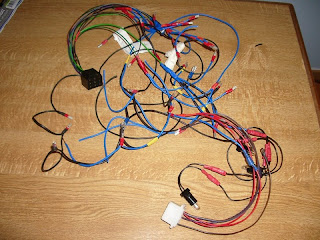 It seems to work pretty well - the leds are activated once the side light button is pressed. 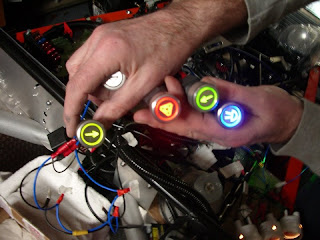 I completed all the wiring from the main harness to the savage switches with some guidance from Dave(DPD.net) on the difficuly hazard and indicator sub loom as the savage switches are a 2 pole switche which make it far more difficult than the stalk on the sierra was. Heres a simplified diagram of what I have carried out - hopefully it will help some others in the same situation although i havent been able to test it yet. 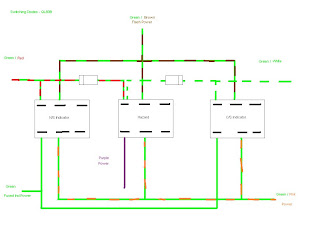 Now ive made all the important changes I thought it was about time to give something a try. Easiest to test are the side lights and fog lights. Plus the fog light only comes on after the sidelights are on its also an important test to ensure the wiring is correct. I reconnected the fog and side light and insulated all the open connectors I could see. I flicked the key and pressed the side light switch and a fuse popped so we had an open circuit withing the side light wiring. We eventually came to the realisation the number plate light wires were earthing so with a new fuse and the wires insulated we tried again AND THEN THERE WAS LIGHT! Ok it sounds simple turning on a switch but this is all part of work we started back in March so we were really chuffed it worked. 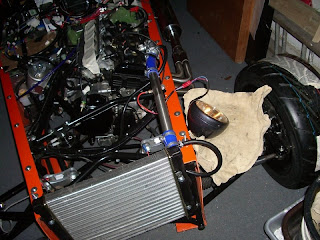 Now onto everything else so we have put the rear arches back on and both headlights in to test the horn, hazards, indicators, headlights, and main beam. The horn is ridiculously loud and I will be getting one for my Leon to replace its dodgey tooter soon as this project is done. Headlights and main beam are fine but dont seem really bright which I guess is just because its in day light. The main beam also activates the warning light on the R1 clocks as I spliced it into the loom saving the need for an additional warning light(black yellow). Indicators work on both sides and illuminate the R1 Clock warning lights(brown and dark green wires). Hazard as I imagined is the difficult one. Both lights flashed but something blew and then we only had one side flashing and before we knew it nothing was flashing and the relay didnt click so i checked the continuity over the diodes and they have definitly had it so il replace them in the week from maplins QL80 to QL81C.

With the components near finished (i say near as it never feels finished) Dad started making holes all over the scuttle to ressemble swiss cheese. Were going for 7 savage switches below the clocks in the centre with 2 on the tunnel for security and a nice symetrical layout if all goes to plan. Im glad he is doing this job as I would hate to cut the hole for the clock as you cant use a hole saw and there is no room for error as too big and it just wont fit and we need a new dash. 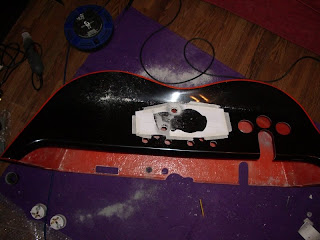 With something fitted to it 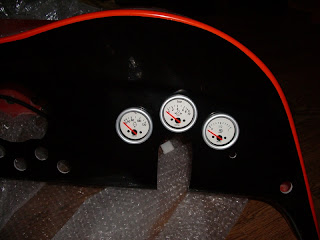 
Only last week we realised we didnt have one as we were sure it was hidden in a box in the attik but sadly it was only a Racetech mirror. MNR got one to us pretty quickly and its just a case of drilling 3 holts and securing with nuts. Connecting it up wasnt too bad its got a weird way of connecting the wires. I used bullet connectors pusged into the sockets and clamped up tight with pliers. 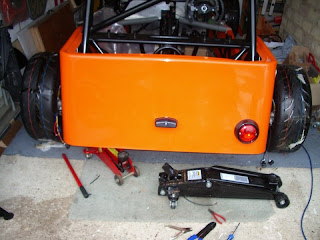 As a quick temporary measure Bassett Senior is making a boot cover out of MDF that we plan to stick in place and spray black. As its cold the kitchen became his workshop 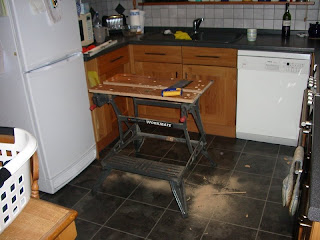 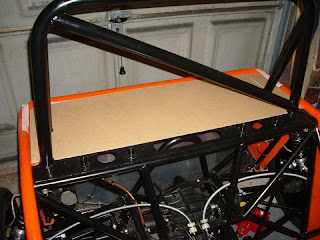 Its proving a bit more trouble that we thought but should be completed sometime in the week.
Newer Post Older Post Home