After the Kit Car Run to Lewes another MNR owner noticed we were dropping fuel on fast left hand bends. This is dangerous as it is released near an electrical circuit(although sealed) and costing us in fuel consumption. The problem we have is an injected engine like our FI R1 has a return line to allow the fuel pressure regulator to bleed fuel back to the tank. The fuel tank has an outlet to allow for air to replace fuel used and release air as fuel is returned. We had used quite a simply method of looping some fuel hose to let air in with the hope fuel couldn't get out from a high point. The problem is the tank is not heavily baffled so when on a left hand bend fuel is sloshed to one side and forced out the tank as the pressure rises. The only safe way we could sort this was to get a fuel tank vent valve from merlin motorsport at a whopping £40 but importantly it does the job. 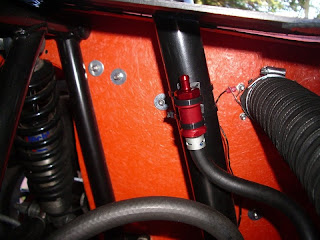 For a few weeks now the car has been playing up. First problem was engine starting where it was hit and miss whether or not it would get going. Our thoughts were it was the battery but a good charge before a drive would sort it out. A few weeks from the initial issue we had charged the battery and headed out for a quick drive. We made it upto the petrol station a mile from home no problems but there was traffic so the fan had been running. With the tank now half full we went to start the car practically nothing just a faint whir as it tried to start. We were in slight predicament, we were at the top of a hill and had no phones or RAC cards. We were close to home so decided to push the car and jump in but at 400kg and even with the two of us pushing it was a greater struggle than we initally thought. Once we were at the very top of the hill we jumped in and let the car roll home as the unassisted brakes and manual steering means everything operates perfectly even when the engine is not running unlike a modern car. With the battery blatently at fault Ross ordered us a new one in at the dirt cheap price of £23 inc VAT which made us wish we had done it sooner.

Whilst fitting my Leon's new straight through exhaust I somehow managed to drive into the kit car whilst navigating the car into a good position to jack it up. Stupid I know but it was only a tap. Only casualty was the number plate light which has a crack around the frame. 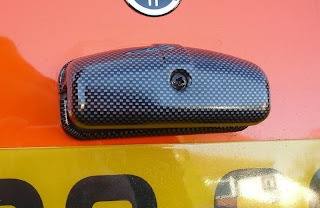 Once removed it was very easy to sort with some superglue held in place with some duct tape - Phew!

The other new problem I believe is clutch slip as when on a fast run with your foot down the revs rise as if the car is being revved at stand still which i believe is the clutch not clamping with enough pressure to transmit to drive the wheels. At the moment its not massively noticeable unless your giving it some but its something I hope we can address shortly with some uprated clutch springs or by doubling up on the original.

Since new the refurbed 3.38 diff has had a very slight leak. It doesnt drip but we have noticed the back cover is oily at the bottom. After trying with a torx head socket to get the fill level bolt off i then realised it was actually a female hex bolt - DOH! Once this was off we began filling. We still had the bottle we initally filled it with when it took 850ml. Today it used the remaining 150ml before it was full. Were not sure whether or not to be worried by this but we did go round and tighten all the back cover bolts so we'll keep an eye on it over the coming months.

Other than this the boot box saga continues where we are getting closer to a luggage compartment but as fibre glassing is a slow procedure especially having several parts we are only just at the stage to attach the top to the box section. 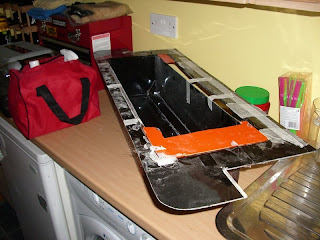 I thought it would be difficult to find a way to bolt the box and top down as we will no longer be able to hold a nut from underneath. Dad had the idea of glueing some plastic blocks under the wholes that self tappers could be used with. It works for now but we had to ditch the black counter sunk bolts. 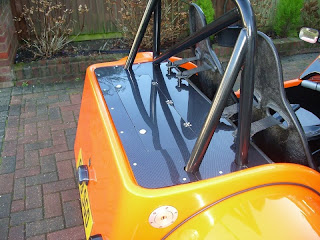 Finally a picture of the box lined with some acoustic carpet from my days of big car stereos. Its also the perfect width to get a halfords tool kit wallet in that currently resides in my Leons boot. 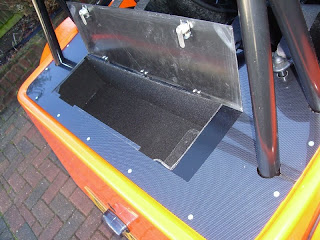