Today I have just received an original airbox from ebay. I was pretty suprised to open it up and find it has all the clamps and joiners, a used but perfectly good K&N performance air filter and an original air sensor. This is slightly annoying as last year when we were rushing to get the engine running prior to the SVA we bought a original second hand sensor by itself for more than the cost of the whole airbox including delivery. 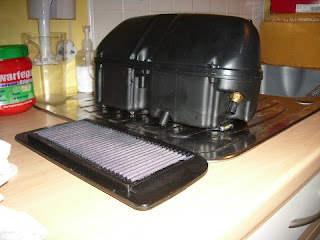 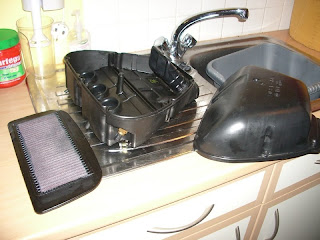 I started with giving everything a good clean the air box was dusty and oily i guess from the gearbox breather so a quick clean had it looking like new. Next job was the filter starting with a light air dusting from the compressor to remove any lodged contaminents followed by a wash with some filter cleaning fluid and a tooth brush.

As for the fitting, soon as I had the bonnet off I knew we would be in trouble. Any how I removed the pipercross filter and offered up the original airbox. Straight away it wouldnt fit in the reverse position as its just too high, hits the cold start valve. To get it under the bonnet would require cutting and modififying the airbox losing the current air box properties and the filter that came with it. Or we could cut a whole in the bonnet to expose the top of the air box. 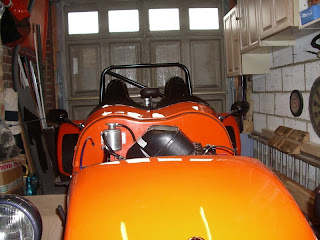 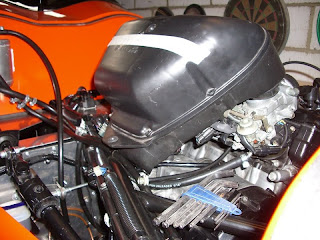 For the time being were going to leave the current filter as is and have a rethink until we have a proper rolling road session so we can see if there is a visible difference between the two options of piper open filter and closed airbox.
Newer Post Older Post Home